Open Lines No. 9 – Letters sent to Members of Parliament in May 1992

In the eighth issue of OPEN LINES, published before the General Election, I wrote: “It is an affront to the democratic process that publication of information of this kind should have to be undertaken by a private individual subsidised by a public spirited foundation. The newly elected House of Commons should insist on urgent action to bring this shameful situation to an end.”

As this ninth issue goes to press, the following Early Day Motion has been signed by over 140 Members of Parliament and more names are being added daily:

“That this House deplores the denial of public access to a large amount of information of public interest supplied in letters from Next Steps agencies to honourable Members in reply to Parliamentary Questions; notes that such information would in the past have been given by Ministers in written answers published in the Official Report, and is now available only in the monthly booklet Open Lines, published with the financial support of the Joseph Rowntree Reform Trust; and calls for urgent action to ensure that this information, whether supplied by Ministers or by agencies, is in future published in the Official Report and not in a separate publication, whether official or not.”

The simplest way of meeting this demand would be a return to the traditional practice of Ministers themselves replying to questions about public services for which they are responsible. The replies would then automatically appear in the Official Report (Hansard), and the principle of ministerial accountability to Parliament would be reaffirmed.If the Government refuses to accept this solution, the only satisfactory alternative is the publication of the agencies’ letters in Hansard.

Above all, whatever is to be done, it should be done soon. It will be even more shameful if OPEN LINES is still being published when Parliament resumes after the summer recess.

The previous issue of OPEN LINES contained letters sent to M.P.s in March 1992. Because of the General Election, none were sent in April. This issue contains 12 letters sent in May – fewer than usual because Parliament was sitting during only part of the month.

As in past issues, only letters from agencies in the social security and employment fields are reproduced; others are listed in the Appendix.

Where errors were found in the tables, the agency has been asked to send corrected figures to the Member concerned and to the House of Commons Library.

The tables published in the following pages show the corrected figures. 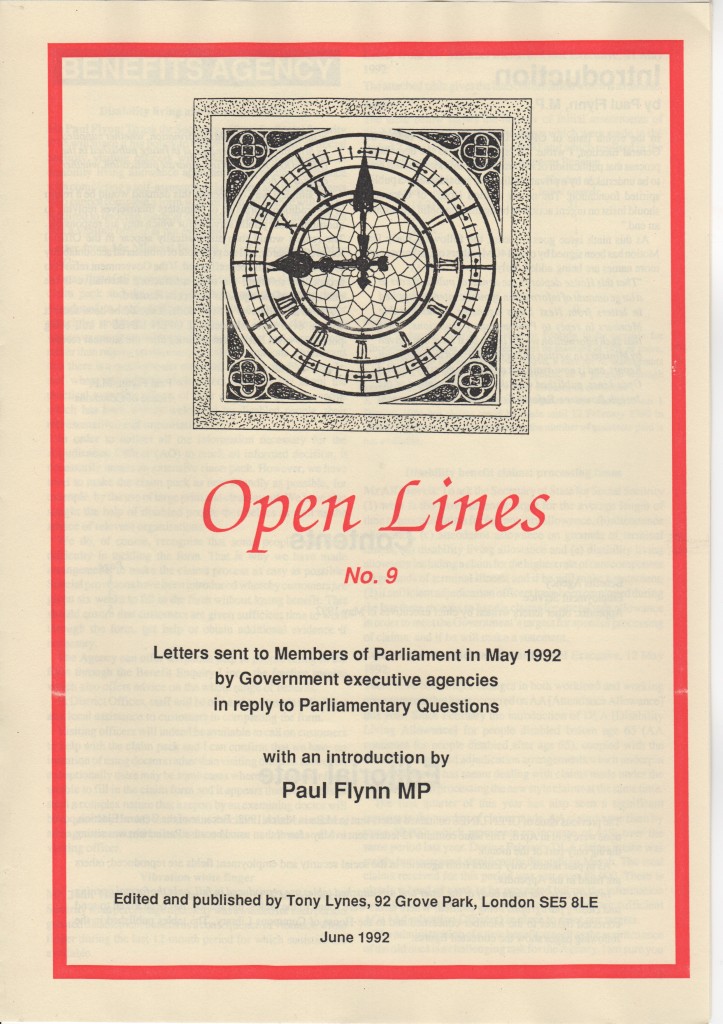