Open Lines No. 4 – Letters sent to Members of Parliament in November 1991

Nationalisation of OPEN LINES is now official Government policy. It was announced by the Lord President, Mr John MacGregor, in a written answer on November 27 (Hansard, columns 558-9):

“The arrangement whereby chief executives reply direct by letter to written questions on operational matters is intended to recognise their direct responsibility for matters which have been delegated to them by Ministers and to ensure that replies about the carrying out of Government business are full, prompt and as helpful as possible. The arrangement has worked well in those respects. However, it has become apparent that there have been some practical difficulties with the procedure – which my predecessor announced on 31 October 1990 – of making the letters public by placing them in the House of Commons Library and its Public Information Office.

“The Government have therefore decided to propose to the House authorities that the House should publish all replies from chief executives which are placed in the Library. The Government consider that the replies should be published regularly and frequently, so that the information they contain is current and useful; that the publication should be available to individuals and organisations outside the House on a similar basis to the Official Report; but that the replies should not be published as ministerial written answers in the Official Report. A separate weekly publication for the replies would meet these criteria, although the precise form of publication and the resource implications will be a matter for the appropriate Committee of the House, to which the Government will put their proposal at the earliest opportunity. I very much hope that it will be possible to introduce new arrangements quickly to meet the concern which has been expressed. I shall inform the House as soon as a decision has been reached.”

This is good news – but not good enough. Publication of information supplied in reply to parliamentary questions is the responsibility of either the Government or the House of Commons. Recognition of that principle is welcome. But why is a separate publication needed? What is wrong with the Official Report (Hansard)? That is where this information would have been published in the past. All that has changed is that Ministers no longer want to accept direct responsibility for services administered by their Departments.

The Government’s proposal will now be considered by the House of Commons Administration Committee. But this is not just an administrative question: it is a matter of fundamental constitutional importance. The chief executives of agencies set up within Government Departments are directly answerable to Ministers, in the same way as any other Government official. And Ministers are directly answerable to Parliament for the actions of their officials.

OPEN LINES, therefore, should not be nationalised; it should simply be put out of business by a return to the doctrine of ministerial responsibility on which our parliamentary democracy rests. Parliamentary questions should be answered by Ministers, not by officials, and the answers should be published in Hansard.

Meanwhile, demand for copies of OPEN LINES is growing steadily as its existence becomes more widely known. My colleagues in the House of Commons have been among its most appreciative readers, as was shown by an Early Day Motion on the subject signed by 68 Members. Sadly, plans to make copies of the last issue available to all Conservative MPs were frustrated by the Chief Whip’s refusal to co-operate. The Government’s commitment to the free dissemination of information does not, apparently, extend to the supply of information to its own supporters. Copies of this issue will be sent to Conservative Members by my office, despite the considerable amount of work involved, in the hope that they will ensure that alternative arrangements are made for them to receive any future issues.

We are grateful for the continued support of the Joseph Rowntree Reform Trust, which has made it possible to continue publishing OPEN LINES pending decisions on other means of publishing these letters. This issue includes nearly all the letters sent to M.P.s in November 1991 by chief executives and their deputies in reply to parliamentary questions. In every case, unless otherwise stated, the main body of the letter and any attached tables are reproduced in full, only the formal opening and closing paragraphs being omitted. The only letter omitted entirely is one from the Benefits Agency to Mr Michael Meacher MP on delays in paying benefits to an individual constituent. Two lengthy appendices to a letter from the Resettlement Agency to Mr Dave Nellist MP have also been omitted (see page 9. column 2). 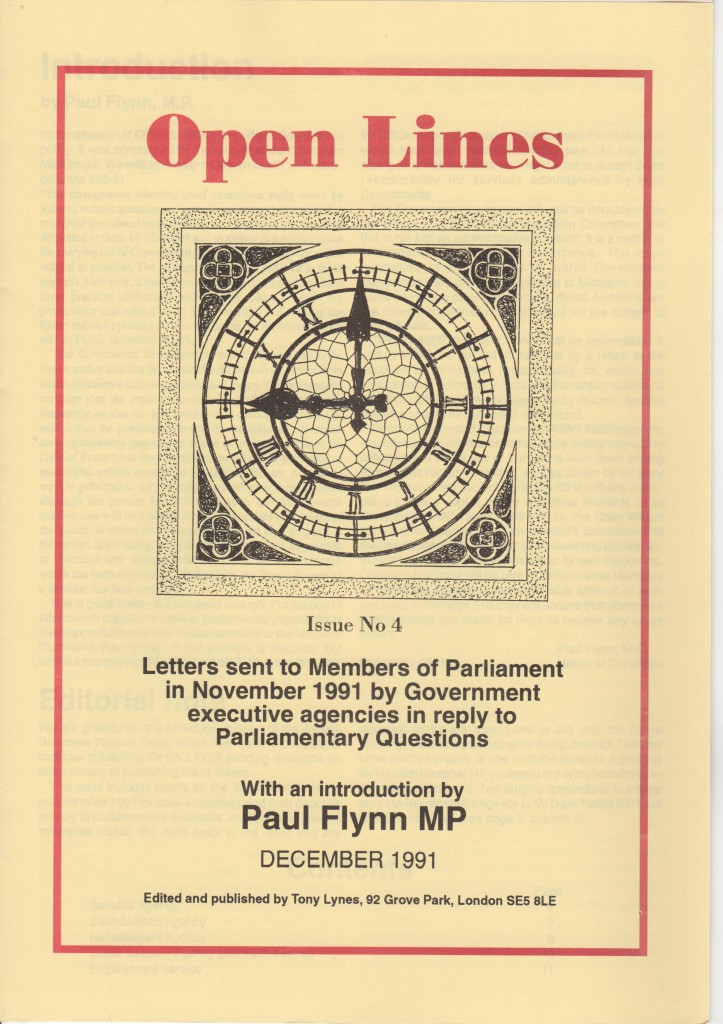