Open Lines No. 2 – Letters sent to Members of Parliament in July 1991

Thanks for your letters of appreciation for the first edition of OPEN LINES. MPs, civil servants and, above all, political, charitable and educational bodies who rely on Hansard as a unique source of information sent messages of support and have demanded this second issue.

It provides information on a wide range of subjects, such as the reasons for refusing Social Fund payments; the number of claimants in each district having deductions made from their income support for unpaid poll tax; the services provided by benefit offices for non-English speakers; and the provision made for homeless people where DSS resettlement units are being closed.

In the cause of open government this issue is again being distributed free of charge – although this cannot continue indefinitely. Our ultimate success would be to cease publication by persuading the Government to publish in Hansard the answers received from executive agencies. This has been recommended by the Commons Procedure Committee.

In the past, when Ministers replied directly to Members the full answers were reported in Hansard. Now only the MP who asked the question sees the reply. In theory copies should be available to the diligent and the determined from the Commons Library and Public Information Office. However, four of the letters reproduced here were not found in the Public Information Office. Copies of two had to be obtained from the executive agency concerned.

The first OPEN LINES contained letters written in June 1991. This issue covers July. Even though Members can table questions during the recess, the agencies are at present refusing to send answers until mid-October because, absurdly, they must wait until the Minister has formally “replied” to the questions. This applies even to questions tabled but not answered at the end of July, while the House was still sitting.

Thus the next edition will not appear until mid-November. And by then, if Ministers match their deeds to their rhetoric on transparency in government, further editions should not be needed.

Possibly it is unique for a publication to ask for its raison d’être to be removed. But this is not a job for private enterprise or philanthropy. It is a job for government.

At least 62 letters were sent to M.P.s by chief executives and their deputies in reply to parliamentary questions in July 1991: 38 from agencies concerned with social security, 10 from those concerned with employment and training, and 14 from a variety of other agencies. The 43 letters published here include all those from the social security, employment and training agencies (including the Northern Ireland agencies), except 5 letters from the Benefits Agency which are of mainly local interest. These, and the 14 letters from other agencies, are listed in the appendix on page 17.

The normal practice is for the chief executive’s letter to be sent on or very soon after the date of the ministerial answer to a parliamentary question. A number of the letters sent in July, however, are headed “July 1991” with no exact date. In these cases, the date of the Minister’s reply to the parliamentary question has been inserted in square brackets— e.g. “[24] July 1991”.

In every case, unless otherwise stated, the main body of the letter and any attached documents are reproduced in full, only the formal opening and closing paragraphs being omitted. 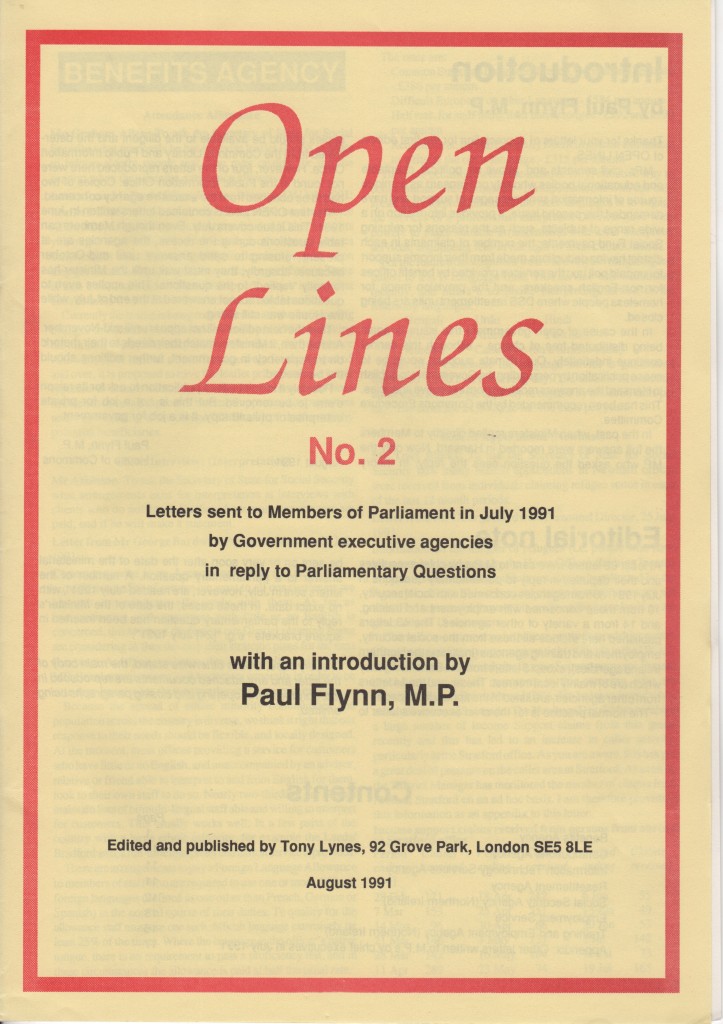