Open Lines No. 1 – Letters sent to Members of Parliament in June 1991

Introduction by Paul Flynn M.P. to the first issue of Open Lines, July 1991

One of the most effective ways in which Parliament can probe the actions and policies of Ministers and their Departments is through Parliamentary Questions. In recent months, this vital constitutional procedure has been undermined by the creation of a large number of “executive agencies” (50 at the end of April 1991) to perform important functions of government. Ministers refuse to answer questions relating to those functions.

Instead, the question is passed to the chief executive of the agency, who writes to the MP. The reply is no longer published in Hansard, but a copy is placed in the House of Commons Library where, in theory, it can be seen by other M.P.s and members of the public. In practice, as we found in the course of compiling this booklet, these arrangements are by no means trouble-free. The Library does not keep a record of the letters received. They are filed in alphabetical order of Members’ names, not in date order. While this should make it possible to trace a particular letter, anyone wishing to see all letters received in a recent period or from a particular agency has to search through the whole box of letters received in the current session.

Even tracing a particular letter may prove impossible. For example, a question about measures to improve the level of service to family credit claimants, tabled by Graham Allen M.P., was wrongly printed in Hansard on 6 June 1991 under my name. Anyone searching for the reply from the Benefits Agency under the letter F would fail to find it. Another question by Michael Meacher M.P., to which the Benefits Agency replied on June 3, did not appear in Hansard at all, with the result that neither other M.P.s nor members of the public could know that the reply existed.

Even if the arrangements worked as intended, a large amount of information of public interest would reach far fewer people than in the past. This situation was criticised in a recent report by the House of Commons Procedure Committee. They wrote:

“We appreciate that one of the main purposes of establishing Executive Agencies was to remove their day to day operation from the direct responsibility of Ministers. Nevertheless, the fact remains that most Members expect to be able to read in the Official Report the answer to a question on a matter such as, for example, the management of local social security offices, which is of importance to their own constituents just as much as to those of the Member who happens to have tabled a question on the subject. So long as questions relating to Executive Agencies remain in order, as we trust they will, Members should be entitled to receive a reply in the normal way by written answer.

“We therefore recommend that, in future, replies from agency chief executives in response to parliamentary questions referred to them by Ministers should appear in the Official Report.”

The Government’s response to that eminently sensible proposal is now awaited. Meanwhile, the letters from chief executives (or, more usually, their subordinates) are piling up unread in the Library. This booklet is intended to make some of these letters, written in the month of June 1991, available more widely. If necessary, letters written in subsequent months could be published in the same way, subject to a small charge to cover printing costs.

There were 42 letters written in June. Of these, 26 were on social security and employment matters and it was decided to limit this publication to these two areas, which are likely to be of most general interest. Twenty-three of those letters are published here (the other 3 were concerned only with an individual case or constituency). In every case, unless otherwise stated, the main body of each letter is reproduced in full, only the formal opening and closing paragraphs being omitted.

The 19 letters not included, 12 of which were addressed to one Member on one subject (management and computer consultancy contracts), are listed in the Appendix.

Like Ministers, executive agencies may, on occasion, seek to dodge an awkward question by answering a different one. In reply to a question by Barry Jones M.P. about the changes in social fund budgets since 1988-89, the Benefits Agency provided a table showing changes in expenditure – a much more favourable comparison from the Government’s point of view. The table is, nevertheless, printed in full on pages 3-4. 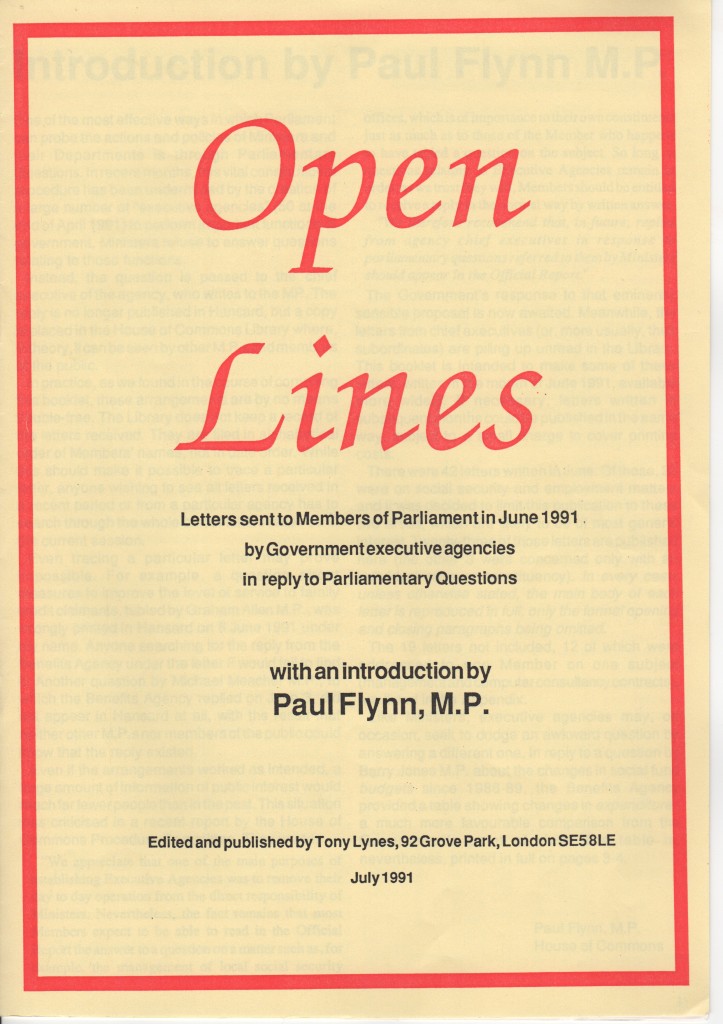