Open Lines No. 10 – Letters sent to Members of Parliament in June 1992

In successive issues of OPEN LINES, I have called for a return to the traditional practice of Parliamentary Questions being answered by Ministers themselves, not by officials. There is no sign of that happening. Ministers are, understandably, very happy with the new arrangement by which, under cover of the “Next Steps” agencies, they can avoid direct responsibility to Parliament for a wide range of public services.

But there is good news to report. The House of Commons Administration Committee, responding to the demand voiced by over 200 Members in an Early Day Motion, has decided that letters from agency chief executives in reply to Parliamentary Questions should be published daily in the section of Hansard containing Ministers’ written answers. This arrangement will commence when the House returns in October after the summer recess. In terms of public access to information, it will no longer matter whether a question is answered by a Minister or by a chief executive.

After a final issue covering the month of July, therefore, its main objective having been achieved, OPEN LINES will cease publication. In its modest way, it will have contributed as much to the preservation of our constitutional rights as many more august publications.

We are grateful to the Joseph Rowntree Reform Trust Ltd. for renewing its financial support, thus making it possible to continue publishing OPEN LINES pending arrangements for publication of chief executives‘ letters in Hansard.

As in previous issues of OPEN LINES, only letters from agencies in the fields of social security and employment are reproduced in this issue. Those from other agencies, or excluded because they are concerned only with individuals’ benefit entitlements, are listed in the Appendix.

In every case, unless otherwise stated, the main body of the letter and any attached tables are reproduced in full, only the formal opening and closing paragraphs being omitted.

Two of the tables were found to contain obvious arithmetical errors. In one case the corrected figures are shown and the agency has been asked to send the amended table to the Member concerned and to the House of Commons Library; in the other, we have drawn attention to the errors in a footnote on page 9. 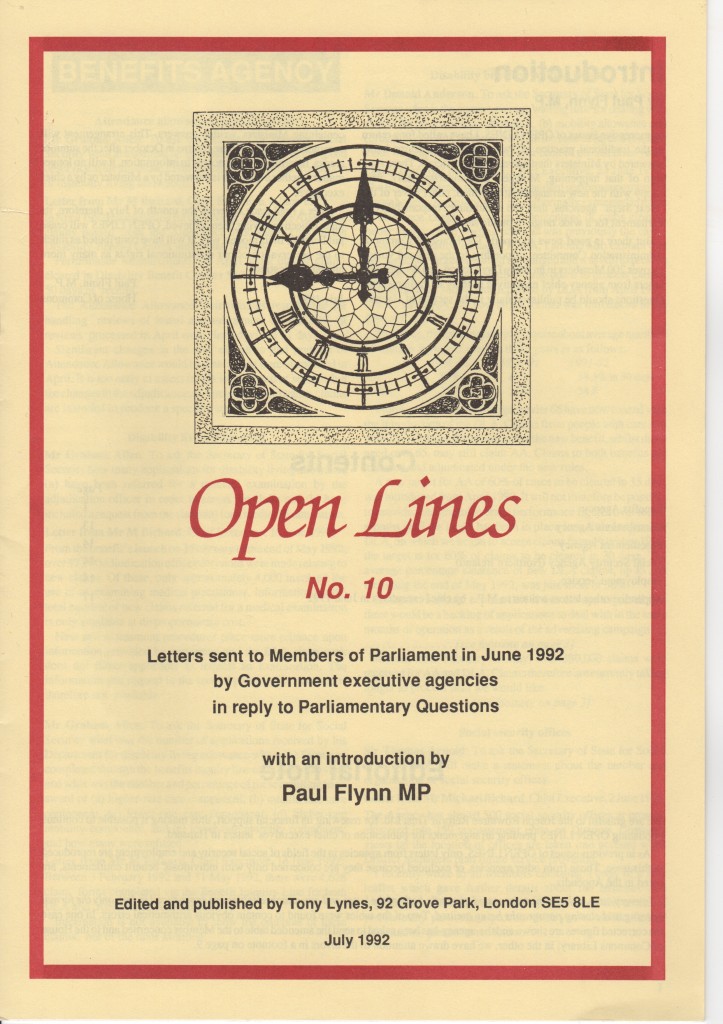